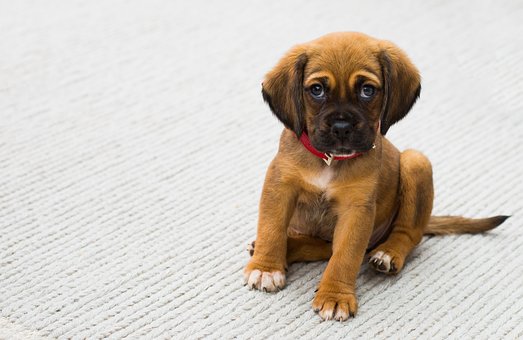 Bringing home a puppy and introducing her to your home is very exciting for everyone. The only one who might be anxious about the situation will be the puppy.

You might want to consider moving it to a higher place. What about your favorite collection of teddy bears, or magazines that you have in a basket by the couch? They will most certainly raise the curiosity of your new puppy. As you move these things out of your pet’s reach, remember it’s only for a brief time. Once your pet has learned her place in the family, you can put your things back where they go. Your life should never be dictated by your puppy. However, by eliminating these curiosity objects from the start, it will allow you to work with your puppy on the basic training she will need to learn.

It’s important to understand that as much as you want your new puppy to be a part of your family, your puppy is still an animal. She will take her cues from her surroundings. If she’s allowed to have free run of the home and access to everything, you’re teaching her that she is in charge. The principal instinct of dogs is to reside in a pack. Your new puppy will assume her new family is her pack. If she picks up the clues that she’s her own boss and she can do what she wants, whenever she wants, she’s being taught she is the leader of her pack. It’s significantly easier on everyone, including the dog, if she learns from the minute she enters the house that she is not the leader and dictator of the family.

Dogs are from the wolf family, and actually prefer to have a den all of their own. Some people today assume placing a dog in a crate is cruel. On the contrary, if crates are introduced properly, they’ll be much loved by the puppy. When planning for a new puppy, do not go out and get the biggest crate you can find to your pup thinking she will grow into it. This is the worst mistake proprietor make. A crate should be large enough for the pet to stand up and turn around in. Puppies usually learn from their mothers not to soil in their bed area. If the crate is too big, your puppy may designate some of her crate for sleeping, and the other half for soiling. You should also never put your puppy’s food and water in her crate.

When your puppy is introduced into the crate, do not simply place her inside and lock the door. This may greatly disturb her. (You should place the crate in a room in your home where the family gathers. You ought not expect the puppy to walk through the whole house to the rear guest bedroom to nap. By having the crate in close proximity to the family, the pup will feel like she is still hanging out with her pack, even when she’s inside her crate sleeping.) Place the crate where it will stay, and just open the door. You can place a towel in the bottom, and a chew toy inside in the event that you want. Some dog’s are very curious. They will just walk inside. Others may be a bit more shy with the crate. Give your puppy time to warm up to the crate. You may choose to give her crate a name. When she enters the crate, you can replicate the crates name, and give her a treat.

She may whine and paw at the door. She may even begin yelping and barking. Do not let her out. Walk her directly to the area designated for pottying. You shouldn’t let your puppy out of her crate and allow her to follow you through the home to go outside. Most dogs will just squat and go where they please. As soon as you are outside, set her down. You would then encourage her to potty. Choose a few words such as,”Go potty,” of”Do your business.” She won’t have a clue as to what you’re saying, at first. But, after repeated efforts and with being granted a puppy treat and praise, she’ll learn what those words mean. Most puppies will have to go out at least every hour during the first few times to familiarize them with their potty area. This is an opportunity for you to catch them doing their business where they need to. Lavish them with compliments.

The first couple of nights may make you wonder why you even brought the puppy home. The repeated yelping and whining coming out of the crate can seriously upset many adults who need their sleep. You should look at your new pup as the baby in the household. Puppies less than four weeks of age might need to go out once during the evening. When she does, pick up your puppy and take her to her designated place. After she has relieved herself, place her promptly back into the crate. You shouldn’t play with your puppy during the night time hours. This will only encourage her to keep the yelping up. After a couple of days, your pup will adjust to the night time patterns of her”pack” and everyone will get more rest. Most dogs have the ability to make it through the entire night without a potty break around 18 weeks.

Some individuals may think it’s harsh to scold a puppy. These individuals may be the same men and women that have a dog running wild in their house within a year. Dogs which aren’t disciplined can wreck havoc on a house. You may return to locate a shredded sofa, chewed up shoes, and garbage strewn all over the place. If there are other pets in the home, you should also consider their feelings. They will probably be intimidated by such a tyrant, and fights could commence while you are away.

If you catch your puppy chewing on something she shouldn’t, a firm”no” is usually enough to stop her antics. Just like other forms of instruction, this may take a couple of days for her to learn. This is the reason you’re advised to move away precious things. The rolled up paper does not hurt. It’s simply loud, and it teaches the puppy you are the alpha in the household, and not her. If she were truly in a dog pack, her alpha could nip her soundly. Therefore, don’t feel as though you’re mistreating her. In actuality, most puppies seem to feel more secure when they know their location.

The most important thing you can do with your puppy apart from introducing a crate immediately, instilling a potty regular, and instructing her what”no” means, is to build the relationship with your new puppy. Get on the floor and play with her. The bond will increase between you and she’ll love you.